The fruit and veg stall is doing a roaring trade. 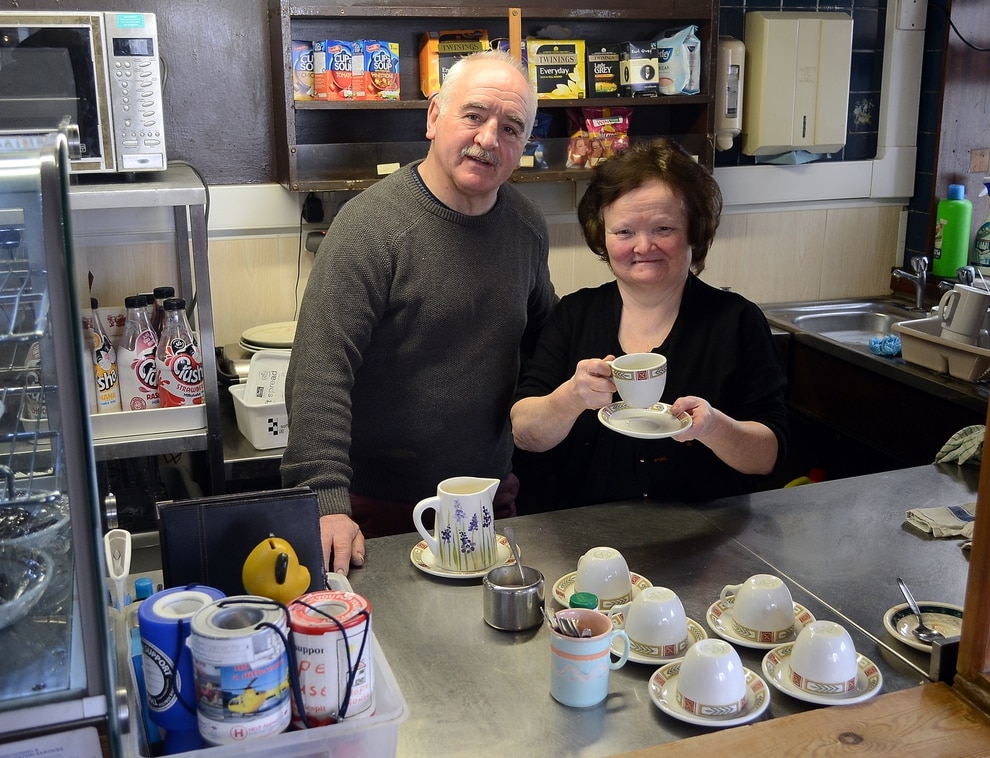 Steve and Norma Spencer of the Tudor Rooms. A roaring trade on the fruit & veg stall. 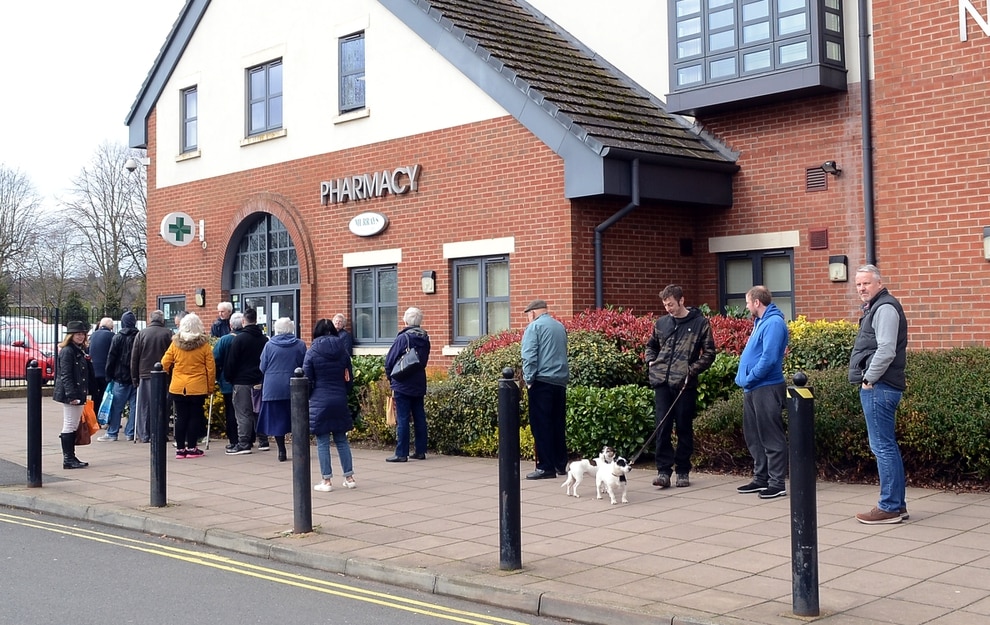 Queuing a metre apart outside the pharmacy. 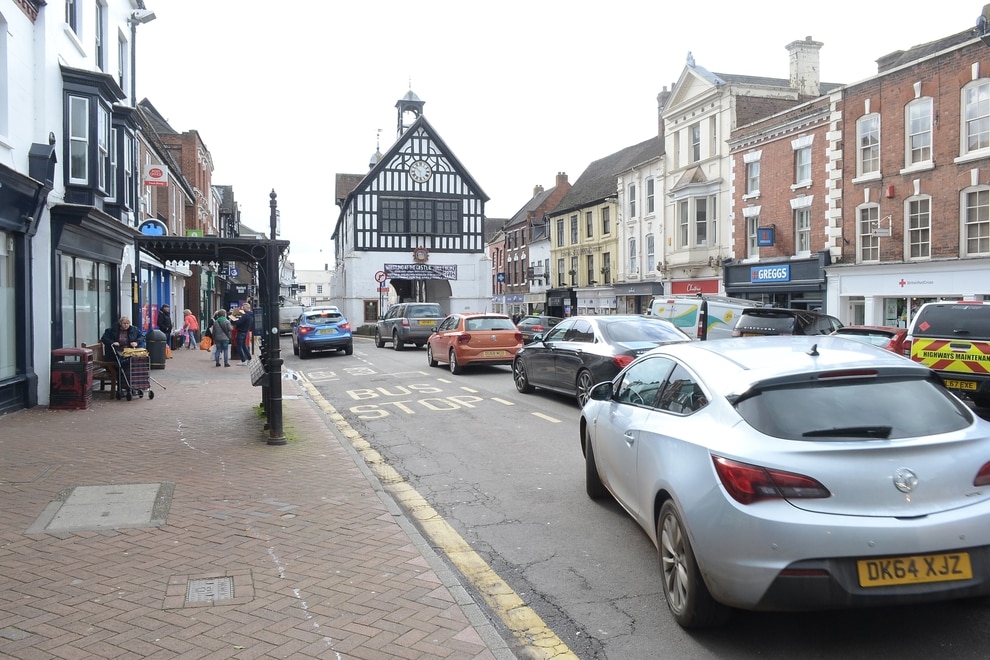 Still plenty of traffic in the High Street. 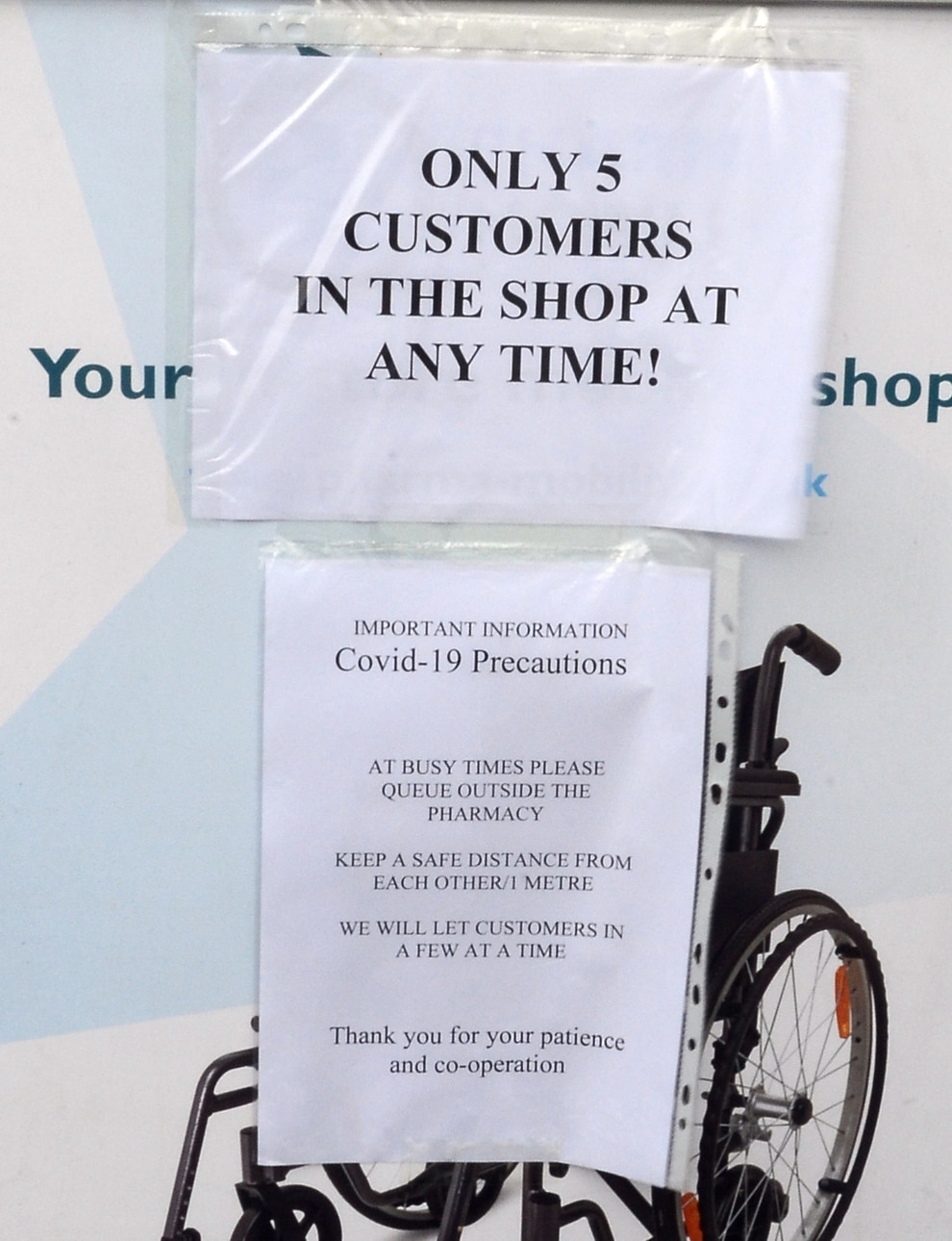 Only five customers a time at the pharmacy.

It's seems as tough as ever to find a parking slot in Bridgnorth High Street.

And if I were to have taken it upon myself to conduct citizen's arrests of the over-70s who were out and about, I think I would have needed a bigger Black Maria.

But it's the things you don't see, and the people who are not there, who tell the story. One or two businesses had impending bad news, but didn't want me to mention it. Their customers will find out what it is this week.

Underneath Bridgnorth Town Hall, the stallholders – this is Friday, by the way – are having varying fortunes.

There are tempting giant scones at Dave Jay's stall, called Nicky's Menu. But he says everybody has descended on the supermarkets over the last couple of weeks.

"It's taken the business away from us."

"It's bad. People are just coming out for food. I'm all right – my husband is a builder so we will survive."

A different story at Tony's Fruit and Veg stall where Tony has had to go off to get more stock.

"I think the supermarkets have run out of veg so everybody has come here. We've been open since 6am and we ran out of broccoli by 9am.

"Big sellers are potatoes, broccoli, cauliflower. All our carrots have gone. And eggs – eggs are another big seller."

At Tanners Wines, Tim says: "One or two people who are self isolating are getting people to come and buy stuff for them.

"We haven't had a downturn in sales.

"Supermarkets are no longer stocking alcohol because it's non-essential. Our beer sales are probably up. Of course, people are not going to the pub. We had a publican in today, who is one of our customers, and his sales are very flat. The town is quieter."

Outside the Golden Lion, the flags of St George are flying, but manager Jon Brown isn't celebrating.

"Rooms-wise it's taken a huge hit. We have a very successful B&B but in the last week I've lost thousands of pounds. Customer-wise – drinker-wise – I'm relatively okay, but not as busy as usual.

"I think what's happening is absolutely terrible, it's blown way out of proportion, and there's no need for it.

"The town is really quiet. People living locally are still coming out, but visitor trade has disappeared."

At the Tudor Rooms, there are a few clutches of people having a cuppa.

Co-proprietor Steve Spencer said: "We've seen substantial cancellations on Sunday lunch bookings. We will be trading while stocks last. It doesn't make sense to be purchasing anything else. We will run the stock down and will possibly be on hand to help any support groups. If we have food stock, we can aid anybody not able to make ends meet.

"As the situation worsens we will review it accordingly. We have no underlying illnesses but we are of the age in which we will be considered for self isolation. My wife Norma is 70 and I'm 66.

"We are in throes of retirement and it's put everything on the back burner. Nobody is going to want to buy a business at the present time."

Mrs Priscilla Passant of Bridgnorth is doing her shopping.

"Why am I out? For the same reason as all the other older people are out. You have got to get food in. I'm 87 at Christmas. I've been buying things like bread and milk.

"I have a daughter who would probably do it for me but she has enough to do without running around after me."

At Prezzo, head chef Daniel Hidvegi is doing some final cleaning up.

"We're closed, unfortunately. We closed yesterday. All the stores are closed," he says.

So what will he do now? Daniel, from Telford, who came over from Hungary nine years ago, gives a thin smile and shrugs.

The traffic warden is about.

"I need to keep the spaces turning over for people to be able to go shopping. There are still quite a lot of people around," he says.

At Bridgnorth Health Centre there's a queue outside the pharmacy, with a notice saying only five people are allowed inside at a time. Keep a metre apart, it advises the queuers.

There are other signs and notices. As I'm reading the notice on the door of the Innage Grange care home, the door is opened to let a lady out.

"Can I help you?" asks one of the staff.

"We are shut to visitors," she tells me. It's a good precis.

And at Elcock Reisen's office where you would normally pop in for "holidays, trips, and shows," there is a chalkboard on which is written: "This office is now in lock down until further notice."

Bridgnorth is ticking over, after a fashion. But as I said, it's the people you don't see...