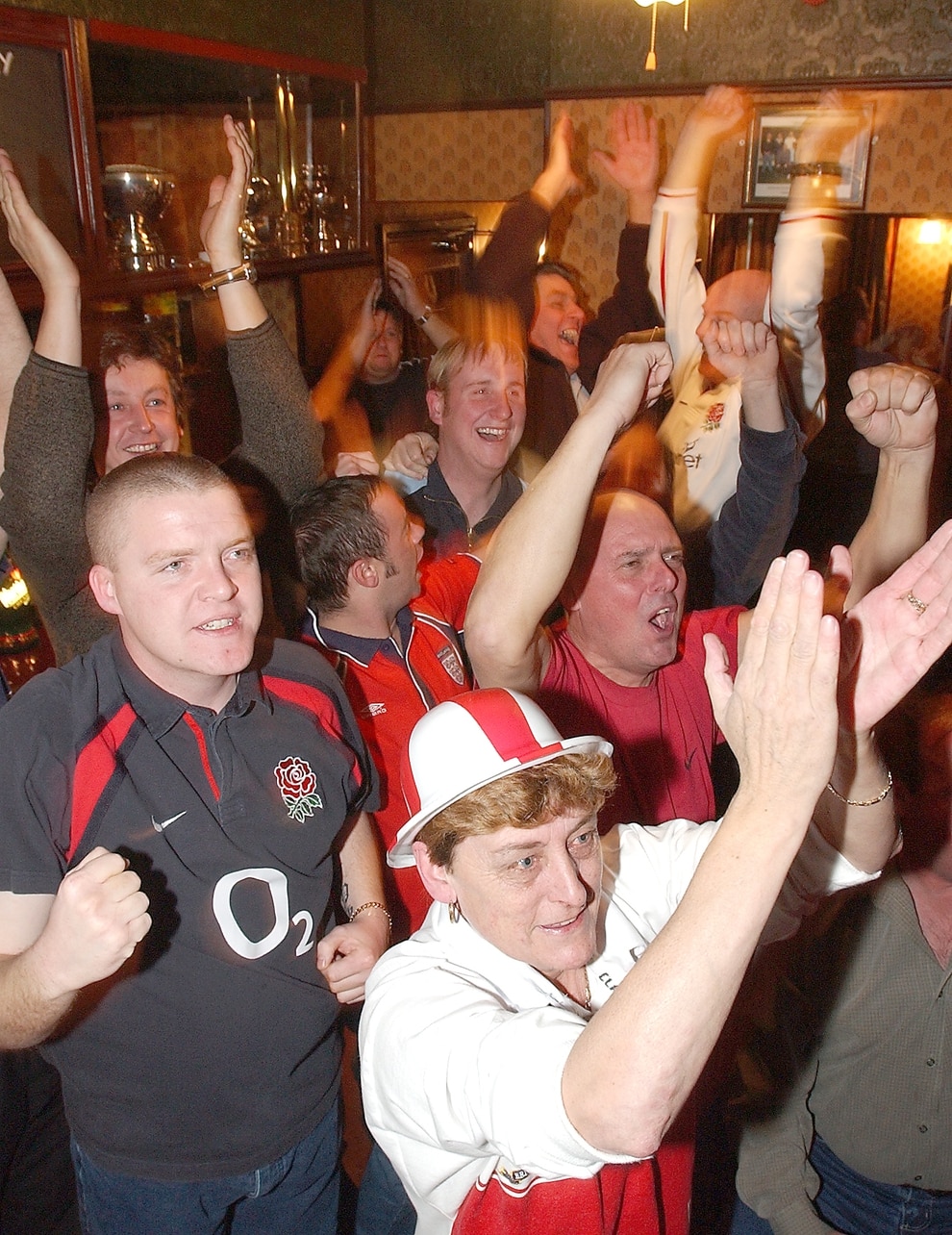 The crowd in the Dun Cow, Dawley, goes wild as England win the Rugby World Cup in November 2003 Two players watch the progress of the final game of bowls at the Dun Cow in Dawley after 110 years of playing. 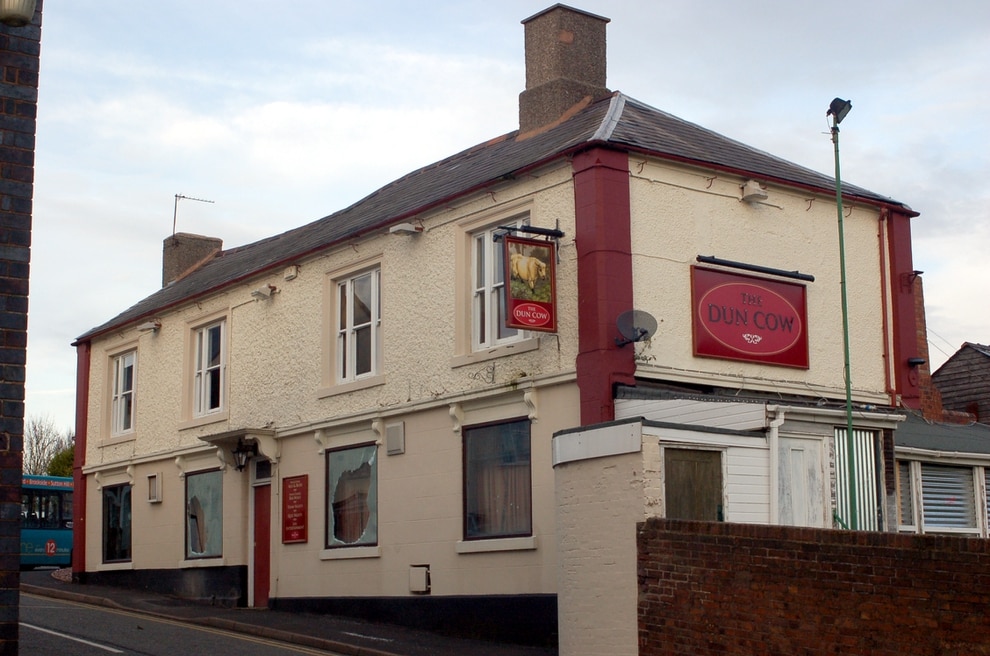 The pub on February 16, 2009, just a few weeks before it disappeared forever. 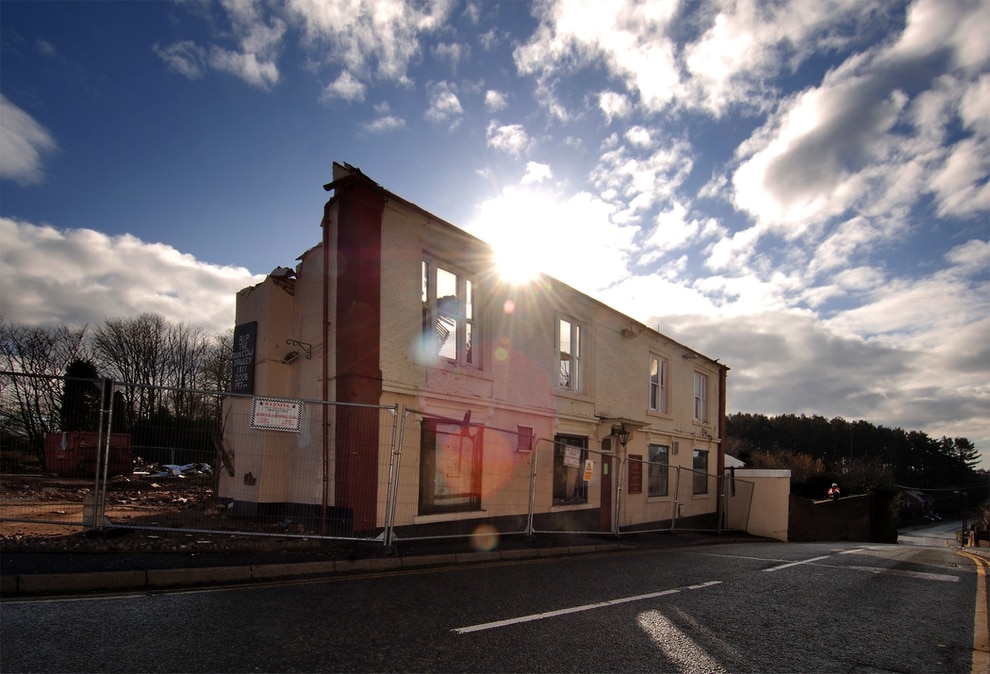 In the final stages of demolition, March 2009. The site is an overgrown eyesore today

A heartfelt little notice on the closed pub which had served a Shropshire community for so long said it all.

The Dun Cow, sitting at the top of, what else, Dun Cow Bank, never did make it to its 200th birthday.

The JCBs moved in in March 2009 – the pub had closed the previous year – and levelled the building which had given so many memories, of darts, bowls, dances in its separate functions annexe, and much more.

Such as the day rugby fans crowded inside to watch England's 2003 World Cup triumph with that late winning drop goal by Jonny Wilkinson.

"People are singing and dancing on the chairs," said landlady Rita Kinder at the time.

Incidentally Rita had an interesting story in herself, as for 20 years she and her friend Susan Denic worked in a factory harbouring a dream that one day, with their husbands, they would run a taverna in sunny Greece.

Instead, when they heard that the licence of the Dun Cow was up for grabs, they sneaked off behind their husbands’ backs and hatched a plan to become its new landladies.

There were meetings, too, such as a protest meeting by Dawley Anti Poll Tax Union, back in 1990. Live music, as well, together with activities such as charity fundraising.

But the disappearance of a part of community history was offset by a new beginning, because the site was earmarked to become a worthwhile development which would benefit Dawley.

While this traditional pub sitting in the heart of the town may have bitten the dust, in its place was to rise that summer a three-storey, "hotel-style" 72-bedroom care home, which would create 80 jobs.

Don't bother going to the spot to admire this new asset. All you'll find is a site of dereliction. For whatever reason, the planned care home was never built.

The pub lingers on in ghostly form. The old bowling green which stood behind it and was the scene of so many sporting battles is now overgrown. You used to be able to read the fading names of the little stands – "the Norman Houlston Stand" and the "Tom Jones Stand" – and perhaps still can, as beyond the fences which surround the site you can see that the stands survive.

The last fixture on the green, which had seen bowling action since the late 1890s, took place in September 2008 when Dun Cow B and Shifnal B brought down the curtain by playing a Worthington Mid Shropshire League division five fixture. The home side won 9-3.

The pub had shut on May 18 of that year and the site had been sold to developers, leaving the club to complete its season using just the annexe as a home.

The pub closure was also the end of the line for this traditional home for Dawley Angling Society. A small group of fishermen had met at the then Dun Cow Hotel for the first time in 1926, minutes showed.

Another group to use the pub was Dawley and District Chrysanthemum Society.

As soon as the building fell empty, the vandalism and arson started. There were a string of attacks, including a fire which threatened to engulf the roof.

So the prospect of demolishing the empty building was welcomed by some Dawley folk.

The Dun Cow, which used to be an Ansells' establishment, is not alone in being a Telford pub to have been knocked down amid plans for redevelopment which have never materialised, and for the site to be left empty for many years.

What was once a proud asset to its town is now an overgrown eyesore site, directly opposite the spruced up town hall, and mocking efforts to regenerate Dawley.

Fun for all the family: Top board games to play during lockdown