David puts us in the picture over extinct bird

Alas, the flightless birds have flown when it comes to Shropshire's extinct Great Auks of which, we now discover, there were at least two. 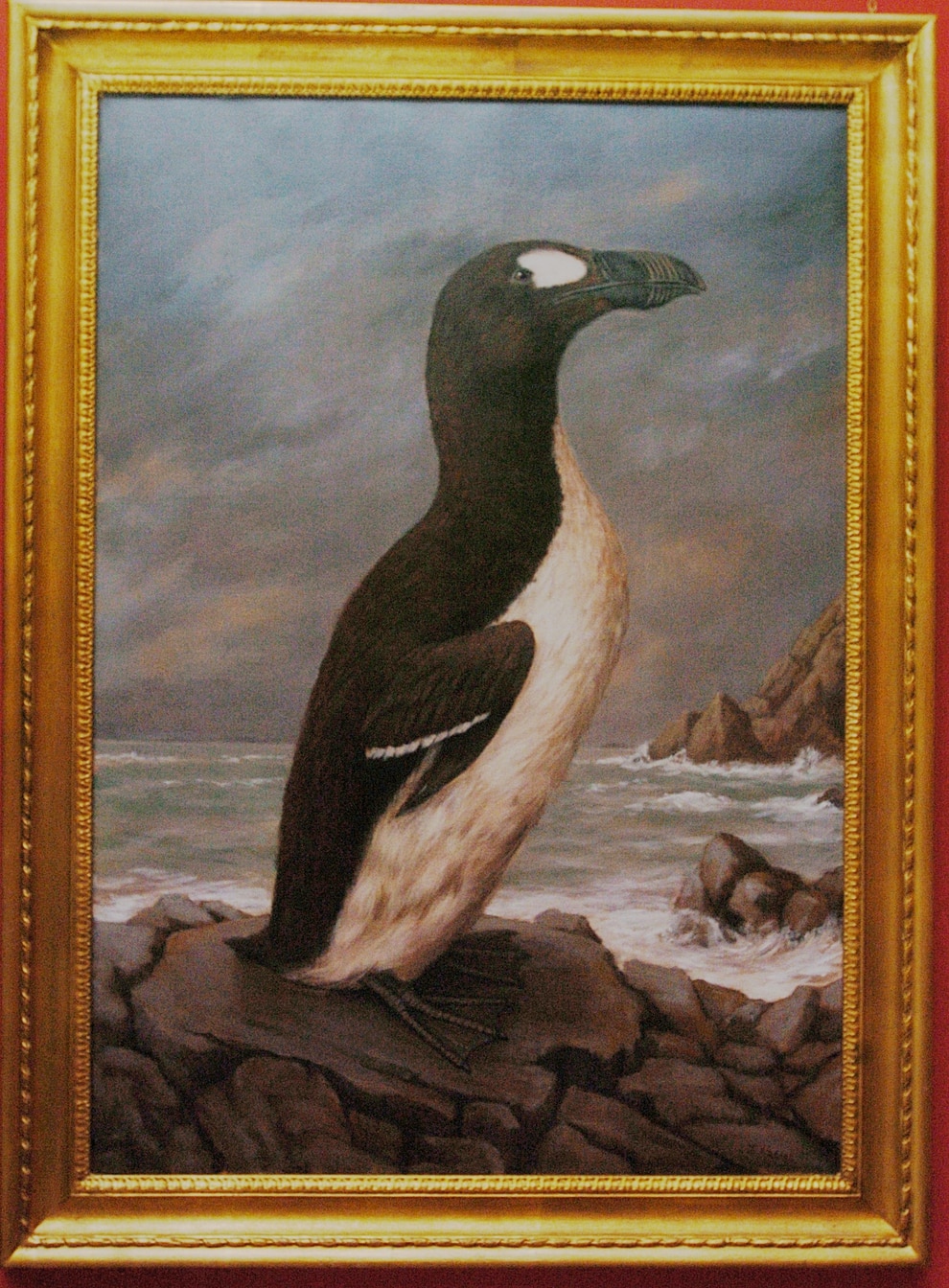 The painting of a Great Auk at Clungunford House. The painting was commissioned in 2012. Jane Roberts and artist Jonathan Adams admire it after it had taken pride of place. The Clungunford Auk before being split from her egg.

A little while ago we highlighted Peplow's Great Auk, a stuffed example of the bird which was hunted to extinction in the 1840s. It ended up in America and last we heard was in the collection of the Museum of Comparative Zoology, which is part of Harvard University.

But it has now turned out that Shropshire had a whole flock of Great Auks – well, two of them, anyway.

The first bird had been part of a collection largely put together by the 2nd Viscount Hill at Hawkstone Park. The collection was later sold to Beville Stanier, of Peplow Hall, who had a private museum which included stuffed British birds.

But Stanier – he later became Sir Beville – apparently decided the Auk didn't fit in with the rest of his collection and sold it on to the Thayer Museum in Massachusetts.

Thank you to David Roberts, of Clungunford House, Clungunford, who dropped us a line putting us in the picture, in more ways than one, about the second Shropshire Great Auk.

David emailed to say: "We were very pleased to read your wonderful article on the Great Auk that was at Peplow Hall. The naturalist, Errol Fuller, who spent many years cataloguing the whereabouts of each Great Auk, refers to the Peplow Auk as 'Roland Hill’s Auk.'

"Of course, it should be noted that Roland Hill’s Auk is not the only Shropshire Great Auk. South Shropshire had the 'Clungunford Auk,' and I attach an extract from Erroll Fuller’s book, The Great Auk, that we use as part of a small display about Clungunford House’s most famous resident.

"You will also find that back in 2012 or 2013 you ran an article about a life size oil painting of the Clungunford Auk by Jonathan Adams."

The book tells how John Rocke, the then owner of Clungunford House, had bought the Great Auk in 1860 to add to his enormous collection of stuffed birds that he kept there. Long after his death it was acquired by the Rowland Ward company of Piccadilly, a taxidermy company that handled the sale of many Great Auks and their eggs.

David said: "John Rocke was a close friend of Viscount Hill as both were keen amateur naturalists. They also both acquired specimens through John Gould and the taxidermist, Henry Shaw of Shrewsbury.

"John Rocke’s taxidermy collection is supposed to have held a specimen of every known British bird before it was dispersed in the early 1900s. The larger cases of birds are now owned by Ludlow Museum.

"The Clungunford Auk’s egg is part of the collection at the Alexander Koenig Research Museum in Bonn.

"Fortunately, the Clungunford Auk herself remains in the West Midlands. She has pride of place at Thinktank, Birmingham Science Museum."

The book tells how long after Rocke's death, the Clungunford Auk was acquired by the Rowland Ward company of Piccadilly, a taxidermy company that handled the sale of many Great Auks and their eggs, and on May 8, 1936 was bought by Captain Vivian Hewitt for £700, who eventually had four Great Auks.

After Hewitt's death they were all sold by the London art dealers, Spink and Son, with the Clungunford Auk being bought during February 1971 by the Birmingham Museum and Art Gallery for £9,000.

Ashford Carbonell artist Jonathan Adams was commissioned in 2012 to do a life-size painting of the Clungunford Auk, which was given pride of place at Clungunford House.

Jonathan said at the time: “Fortunately there was plenty of visual information through prints, photos, and preserved specimens to give me everything I needed to complete the painting.”