Mrs Susan Morgan was surprised and delighted when she saw one of our Pictures From The Past the other day featuring her late grandfather Charlie Evans playing the melodeon. 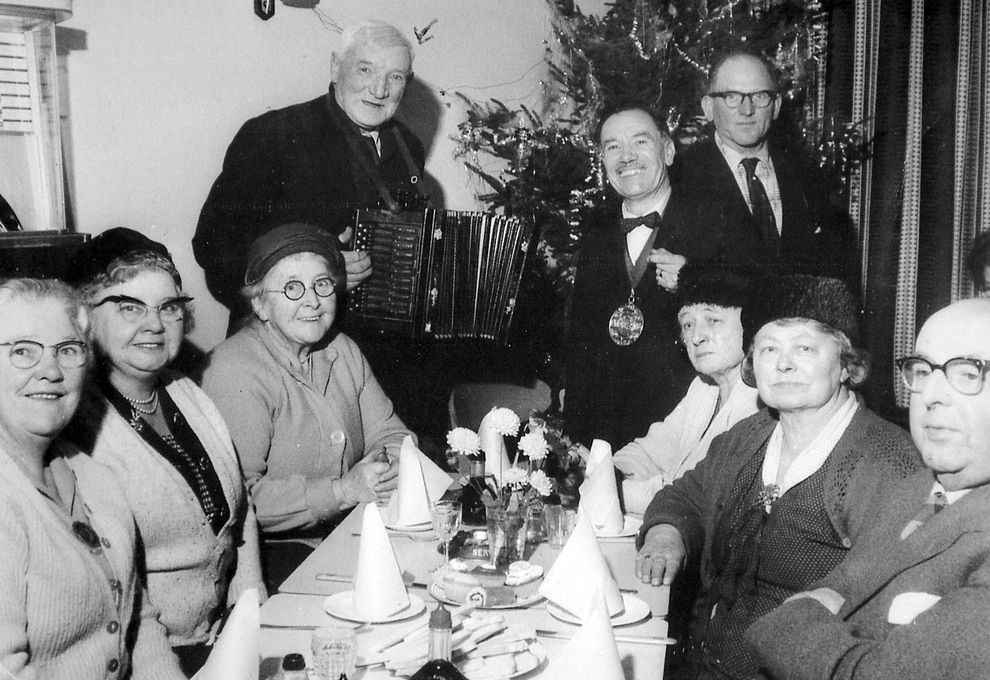 Playing to the Meole Brace Darby and Joan Christmas lunch

"I was 11 when he died. To see his picture after all these years just blew me away," said Mrs Morgan, of Cleveland Avenue, High Ercall.

And although it has been over 50 years since Charlie passed on, his melodeon may still, somewhere, be entertaining people today.

"It was a beautiful thing. I only wish I could have found somebody to play it for me before I sold it," she said.

"I used to open it now and again to air it. It was in immaculate condition.

"I sold it about three or four years ago. None of my family were musical people so we couldn't play it. It got to the stage of thinking: why keep it?

"Now somebody else is having the pleasure of using it. I had to play it over the phone to man buying it so he could hear it being played. I must have sounded horrendous."

Mrs Morgan says Charlie, from Meole Brace, had had two melodeons – they are types of accordion.

"As I remember, the biggest melodeon was in a big wooden box. It was not working and my mother took it to somebody who had a shop on Wyle Cop to see if he could repair it because he was a friend of the family.

"When mum went in to pick it up, he said it couldn't be repaired and they had scrapped it."

She has sent us a couple of undated pictures of her grandfather, one showing him playing his melodeon in the Music Hall at Shrewsbury, and showing an unusual "accompaniment" of sorts in what was described as "The Biggest Aspidistra in the World." His plant was on show as Charlie played to an old people's festival, and Charlie was quoted in a newspaper as saying that the leaf, and the width, were both 36 inches.

Mrs Morgan said: "As a child I remember him having two melodeons, a violin, and playing a Hohner mouth organ which he used to play to me and my late brother."

She said her mum used to go to his house to clean, and while there he would play to the children.

"I still have his mouth organ, although I can't play it. It's more a sentimental thing."

"He worked at the Army camp at Atcham in the Second World War, and also worked on the highways with his steam roller – it was an old fashioned steam roller like the ones they have at Onslow Park.

She added that Charlie had had a motorcycle accident which left him with a straight leg.

"He modified his pushbike so that he pedalled with just one leg.

"Seeing him in the paper brought back lots of lovely memories. I'm hoping that somebody might see the pictures and say something like 'that was my mother at the Darby and Joan Club.'"

West Midlands Trains boss: We are sorry we have let passengers down

Restored painting turns out to be genuine Rembrandt