A woman who set fire to a house in Telford after a falling out with the occupant has been jailed for three years.

Tracey Bradley, 51, poured lighter fluid through the letterbox at the property in Highlander Drive, Donnington, before igniting it with a lighter, a court heard.

Police and fire crews from Telford and Wellington were called by neighbours, who thought the householder Amanda Bellwood was inside, after smoke was spotted coming from the two-storey terraced house on January 20, 2016, at about 11pm.

They used a hammer to break a window and buckets of water to tackle the blaze which spread through the ground floor leaving the landlord with a total loss of £12,258.

Bradley admitted an offence of arson reckless as to whether life was endangered at an earlier hearing.

"The ladies knew each other. They had a falling out.

"On the evening of January 20, 2016, Bradley went to to buy two bottles of lighter fluid. Later she went to Miss Bellwood's house and set fire to it.

"The method was using lighter fluid and pouring it through the letterbox then igniting it with a lighter."

Miss Murray said the exact cause of the falling out was unknown. She said Bradley, who has schizophrenia, was captured on film at a petrol station purchasing the accelerant. And was subsequently arrested.

"She denied starting the fire or being near Miss Bellwood's home at that time. When shown the CCTV footage she did admit not liking Miss Bellwood," said Miss Murray.

"We are not sure what the motivation was for starting the fire, but it is clear there was a danger to multiple properties."

Miss Frances Willmott, mitigating for Bradley, said: "At the time Miss Bellwood had not been present at the house for two days. The court might feel this is something Miss Bradley would have known."

She said there was no "evidence that this was a revenge attack" and that her client had not been in trouble since then.

However, Judge Peter Barrie sentenced Bradley, of Highlander Drive, to three years imprisonment. She must serve half before being released on licence and she must pay the victim surcharge.

The judge said: "Aggravating features were that there was a degree of planning involved. You went to the petrol station, you used lighter fluid and the background gives the case some flavour of a domestic incident."

The court also heard that the case was delayed for almost four years after Bradley changed her initial not guilty plea to guilty on the day of the trial. After that she applied to vacate that new plea. This was finally rejected at a hearing last month when Bradley was immediately remanded in custody.

She was also found not guilty of an offence of arson with intent at the Shrewsbury Crown Court sentencing.

At the time of the blaze neighbours described to the Shropshire Star how they attempted to fight the fire, springing into action to try and help after realising a blaze had taken hold.

Neighbour Richard Waithaka said he went out with a bucket of water after seeing flames coming out of the letterbox.

It was his partner who called 999.

At the time Mr Waithaka said: “A woman lives there and we didn’t know if she was inside. I ran at the front door and rammed it down. I tried to get to the living room but there were flames everywhere.

“You could just feel the heat and the smoke. The fire service came pretty quickly.

“It could have been a heck of a lot worse. If that had gone up, these houses are attached to each other. I’m relieved that nobody was in the house at the time. I’ve no idea if the woman who lives there has been back yet or knows what happened.”

Next door neighbour Gill Putman had been asleep but awoke to sounds of banging and someone ringing her doorbell. She said: “When I came out you could see the flames coming out the front door. It was horrible.

“Someone used a hammer to smash the door at the back.

“Two fire engines turned up and I had to leave my house and wasn’t allowed back in for a while.”

She took refuge at another neighbour’s house until she could go back into her property in the early hours.

In the aftermath, the authorities boarded the front and back doors after firefighters put out the flames and the charred remains of a door could be seen on the ground outside the house. An investigation was immediately launched. 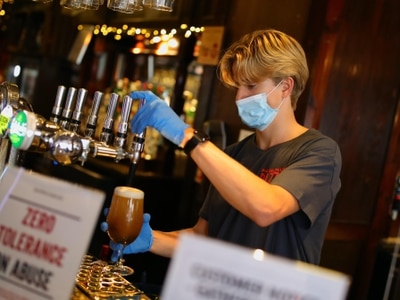