The former head of the Army says he is worried about the size of British forces – and has called for thousands more troops in the face of a Russian threat.

General Sir Mike Jackson said the Army should be increased in size to 100,000 from the current figure of around 78,000, but urged for caution as relations between Britain and Russia drop to the lowest point since the Cold War.

He spoke out as relations between Britain and the Kremlin deteriorated further after the attempted murder of agent Sergei Skripal.

Sir Mike, speaking exclusively to the Express & Star on a visit to the West Midlands, said Vladimir Putin had become a ‘latter day Tsar’ and was playing by his own rules in a bid to recreate the power of the Soviet Union before the fall of the Iron Curtain.

He said it was ‘outrageous’ that Russia thinks it can assassinate people in Britain.

Dressed in a suit, the 76-year-old spoke with a gruff voice to an audience of around 200 people at Codsall High Community School in an event to mark the anniversary of the village’s art festival.

While the dark bags under the eyes have gone – erased following laser treatment – the man nicknamed ‘Prince of Darkness’ still holds the authority of the figure who ran the British Army.

Asked if the British Army was ready for a threat from the Russians, he said: “Readiness is where it is ought to be at the moment.

“If the tension rises it may be necessary to reduce ‘notice to move’ on parts of the army which are not at the moment on a ‘quick move’ basis, but these are judgements which are made as situations develop.

He said: “You don’t know what’s round the corner.

“More often than not the next thing which happens will be unexpected.

“It will arise in a set of circumstances which probably no-one has been clever enough to predict. Things come out of the blue.

“We should not be at all complacent that we are of no significance to Russia.

“Russia thinking it can assassinate people living in Britain is outrageous.

“There are a range of measures available, diplomatic, economic and it will be for the Government to decide what measures additional to the current sanctions they wish to impose.”

And his take on Russia, helped by his education reading Russian studies at Birmingham University, was thought-provoking, if not concerning.

“At the end of the Cold War their buffer states in Eastern Europe are now in the western camp –this is salt in the wound.

“We don’t like the way they throw their weight abroad. We believe in a rules-based order and basically for Putin its ‘stuff your rules, you have your rules, that’s fine, but don’t expect us to live by them’.

“Their emphasis is on the nation state, on mother Russia.They truly believe they are of great power status. So we have a problem, I’m afraid, whether we like it or we don’t, there is a sense that if it is the Russian state [the attempted murder of Sergei Skripal then they can think] ‘we can do this, we don’t think Britain will do much back and we don’t care.

“So we need to be quite careful. I don’t envy the PM.”

Sir Mike said he feared Putin now had ambitions to replicate the full power of the Soviet Union in the 1960s, adding the Russian leader’s description of the fall of the Soviet Union as ‘the greatest geopolitical catastrophe of the century’ was telling.

“He wishes to replicate the strategic position which the Soviet Union once had.

“The West prides itself on promoting a rules based order and I think for Mr Putin [he thinks] they are your rules, not ours.

“What he would wish is to replicate the power and the place at which the Soviet Union had at the height of the Cold War, that’s what he’s after.”

While Britain works out its response to the Russian threat, Sir Mike said other countries were facing a worse peril.

He said: “To achieve a look like the Soviet Union puts in jeopardy the independence the three small Baltic states [western Ukraine, Lithuania and Estonia].

“There is real concern that their independence is threatened, not by war with Russia, but forms of blackmail or arm twisting and part of that is the reason Nato has stationed a small force in the Baltic states to say ‘you keep your distance’ and if needs be to act as a trip wire. It’s not a comfortable situation.”

Sir Mike joined the army aged 19 after graduating from Birmingham University in 1967. Across his 44-year career in the army he served on three tours to Northern Ireland.

He was commander of the UN peacekeeping force in Bosnia between 1995 and 1996 and was later appointed commander of Nato’s ACE Rapid Reaction Corps, from 1997 to 2000.

He was appointed Chief of General Staff in 2003 and led the invasion of Iraq, before retiring in 2006.

Asked his most difficult decision, he said it was when he refused to follow Nato command, from General Wesley Clark, to block an airport during the Kosovo conflict, avoiding a confrontation with the Russians.

He reportedly told General Clark ‘I’m not going to start World War Three for you’. Speaking at the talk, Sir Mike said: “He asked to me to do something which I thought was pretty barking.

“So I was a mutineer thinking I would have to say my piece and accept my P45.

“Anyway, it didn’t work out that way.” 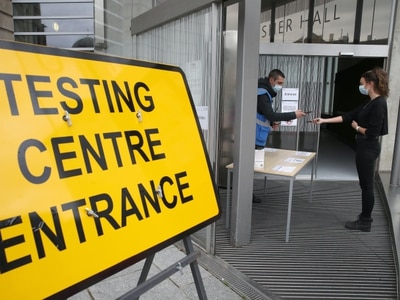