It’s the show that has it all: musical talent young and old, songs for everyone - and of course, mighty Brummie comic Jasper Carrott.

“This is a great theatre, it really is. The stage is a bit small though - you will catch me if I fall off, won’t you?”

The comedy superstar was joined by school pal (and former The Move, ELO and Black Sabbath drummer) Bev Bevan, The Rockin’ Berries’ lead singer Geoff Turton and Stand Up and Rock regular, key player and vocalist Abby Brant. Making up the remainder of the night’s musical offering were also The Move bassist Phil Tree and guitarist Tony Kelsey, and new to the tour, singer Suzi Woo.

Jasper opened the evening by announcing he would be using material both old and new - and while his new material was superb, and much of his reused material remained very funny, my parents and I realised we may have been to see the comedian too many times in recent years; given that we knew many of his punchlines before he’d even finished constructing the joke.

My friend who had never seen the show, meanwhile, thought it was the quite possibly one of the funniest things she’d ever witnessed - howling with laughter at Jasper’s punchlines, and giggling herself to tears at his brilliant stage manner and facial expressions.

The crowd, made up of a variety of ages, were laughing out loud throughout the show too, as he covered a range of topics, from getting old, to Birmingham Airport, prostate checks, his hatred of caravan owners, obesity, Tipton - and much, much more.

His band, meanwhile, were tremendous from start to end. Kicking off their musical offering with a short rendition of Focus’ Hocus Pocus, which led into a cover of Black Sabbath’s Paranoid, they displayed strong vocals, clean sound - and, of course, thrilling hefty drums.

Geoff Turton then sang a stunning medley of Beatles songs, which included hits such as Paperback Writer, Drive My Car and Day Tripper. The Birmingham-born star may have reached 73, but his smooth, sweet, youthful vocals have not aged a day.

Young singer Suzi Woo displayed a lovely voice too, performing strong renditions of Carole King’s A Natural Woman and The Miracles’ Love Machine, before joining Geoff for a jaw-dropping duet singing Jennifer Warnes’ and Joe Cocker’s Love Lifts Us Up.

Geoff even treated fans to a performance of The Rockin’ Berries’ hit He’s In Town - which he said he last played on the stage of the Grand in 1964; the year of the song’s release.

Drawing the show to a close, Jasper strapped on an acoustic guitar and joined the band to play an array of silly covers (turning The Beatles’ Yesterday into a song about leprosy, for example), before paying tribute to late Status Quo icon Rick Parfitt, with smashing renditions of Caroline and Rockin’ All Over The World.

Jasper even treated fans to a short performance of his 1975 hit Funky Moped - which was met with howls of laughter and whoops and cheers.

The evening was drawn to a close with ELO numbers Mr Blue Sky and Don’t Bring Me Down - to which the whole room rose to their feet.

The Wolverhampton show was the ninth date Jasper and his team have performed in the Midlands and Shropshire, with his next in the area taking place at Malvern, then Shrewsbury. He will then travel around the country, before returning to the Midlands with a show at the Lichfield Garrick on October 4, 5, 6 and 7.

If you’ve not seen Jasper’s Stand Up and Rock tour before, get yourself a ticket.

It really is a show not to be missed.

Online Entertainment Editor for the Express & Star and Shropshire Star. E-mail me kirsten.rawlins@expressandstar.co.uk, or phone 01902 319368 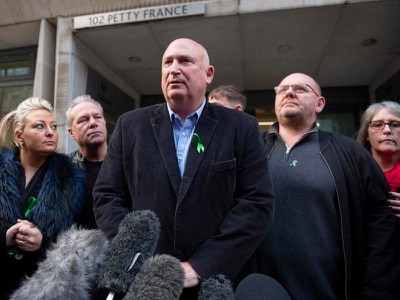