'I feel inspired by it': Bearwood artist creates magic with mosaics

Welcome to the colourful world of mosaic artist Caroline Jariwala.

Using her endless enthusiasm and creativity she is giving unwanted crockery a new lease of life as vibrant works of art.

Even her own home has been transformed into a giant mural with bright, spirited mosaics leading you up the front steps and through the hallways.

Everywhere you look there is something fascinating and beautiful to admire including a breathtaking garden wall full of woodland creatures and wild flowers.

"There is something potent when mosaic-making with broken, chipped, discarded, rejected and second-hand crockery. Using the unwanted and making it desirable; transforming ugly into a thing of beauty.

"The everyday, thrown away, is picked up and cherished – sometimes by the very people that rejected the item in the first place," says Caroline, of Mango Mosaics in Bearwood, who also uses ceramic tiles, glass beads and pieces of mirror in her work.

Her cupboard shelves are full to the brim with plates, bowls and cups all waiting to be incorporated into one of her next projects.

"I collect crockery wherever I can find it – from charity shops, car boot sales and flea markets. I also have what I call ‘crock fairies’ who very kindly leave boxes of broken crockery on my doorstep: a smashed favourite bowl or cup does not have to be added to landfill.

"That is another of the thrills of working with these materials –its sustainability: the knowledge that I am not extracting from the earth’s resources, or adding to the problems of pollution, but recycling materials that are no longer usable in their original form.

"Some may think of these materials as waste but to me they are gold," says Caroline who has masters degree in art, health and well-being from Birmingham City University.

She began her art career as a painter but found that mosaic allowed her to add more depth to her work and she quickly became addicted.

"While painting I yearned to build up layers to bring about texture and depth. I felt I strived to evoke texture in my painting, whereas in mosaic, texture is real in the embossed surfaces and undulating forms of ceramic crockery," she says.

"I describe myself as picassiette mosaic artist. Picassiette is a French slang term meaning ‘stolen from plate’. It is as though I am freeing the crockery pattern from a teapot or a serving dish to give new life.The mosaic speaks to the human condition.

"It works on many levels. People are reminded of crockery from their childhood; there is a positive reminiscence connected to their own story," she adds.

Her favourite china to use in her designs is always from the 1970s and she uses a variety of techniques and tools to cut it into smaller pieces.

"There were lots of bold colours and patterns and these give me so much inspiration. What I love about mosaic is that you're not constrained by the design, there are no strict rules, it's very freeing," explains Caroline, who is currently working on a three-panel enchanted garden-themed commission.

While a lot of her inspiration comes from the crockery she is using, she is also influenced by nature and the Rangoli designs and Mendhi pattern of her Gujarati Indian heritage.

"Making with mosaic is unlimited. New ideas blossom when I come across new crockery.The pattern and texture will inspire me into making. I use happy accidents and mistakes freely.

"My favourite happy accident came about when I saw a cup fragment of Kilncraft Bacchus.

"The pattern resembled an eye. I now deliberately and carefully cut out this crockery to make eyes.

"Pareidolia is the name given to finding associated images from an object. We used to do it as children; we see rabbits in clouds, faces on rock cliffs, even the man on the moon.

"I have discovered that I am using this consciously and unconsciously in my creative process," explains Caroline, who lives in Bearwood.

It's possible that you have already seen some of Caroline's work as she took part in the Big Sleuth and Big Hoot art trails in aid of Birmingham Children's Hospital.

Caroline's Bear 'Sweet William', which was on display in Cathedral Gardens, Birmingham in 2017, was voted the most popular by the public.

Her owl Starlight was designed by working with Birmingham's Children in Care and went on show in 2015.

Mosaic has also taken Caroline all around the world including Chile where, using the theme of endangered plants and animal species, she was part of a team of 60 artists which created an epic 328ft mosaic on the external wall of Puente Alto’s Metropolitan Town Hall.

"This was so inspiring. There were 60 artists from all over the world and we all came together to share ideas. It's something I will never forget," she tells Weekend.

Since then, the British Association of Modern Mosaics member has been part of projects and run workshops in Bodrum,Turkey, Gurgaon, India, Espoo and Finland.

Another of her favourite projects which was closer to home in more ways than one was a similar project at Hampton Court Palace in London called Gnomes Unearthed.

Caroline, who also runs workshops teaching her skills in her home studio, collaborated with Trinjan Women’s Social Group in Hounslow to create ideas and designs for the sculpture.

"This was a very special and beautiful for me because I'm from the borough of Hounslow and I was born at the same hospital," she says.

After devoting so much time to a project, many people might think it would be hard to let the finished piece go to a new home.

"I put so much joy and love into my work every time. When I finish a piece, I feel inspired by it and it makes me want to get started with the next one," she adds.

King of stand up on road again: Russell Howard talks ahead of Birmingham shows 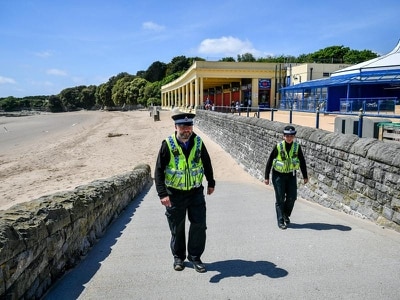