They’re a mother and son team with a love of dance, music and tapping to the beat. 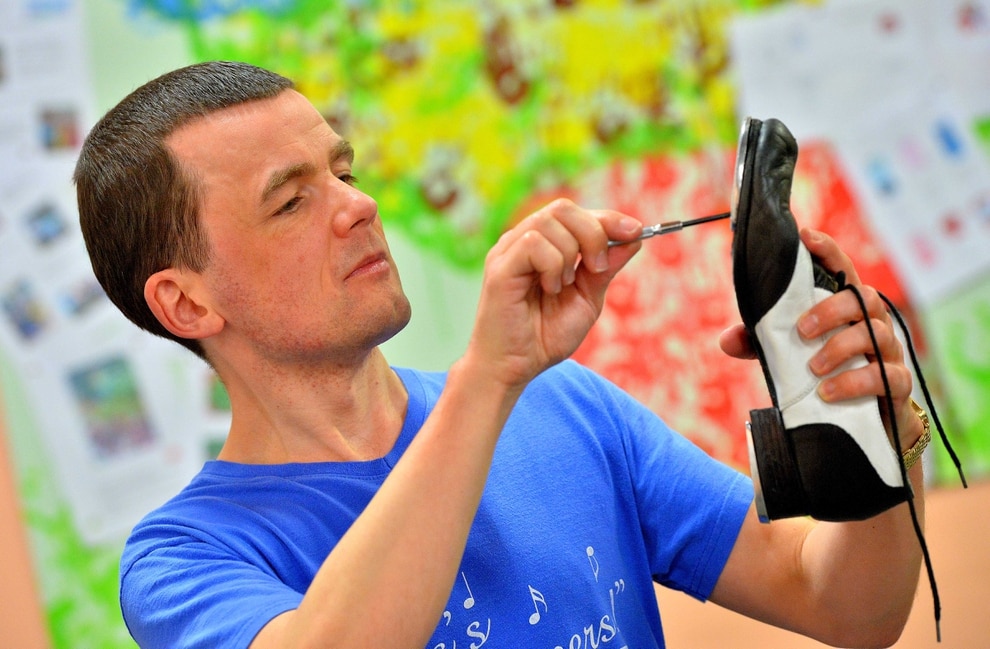 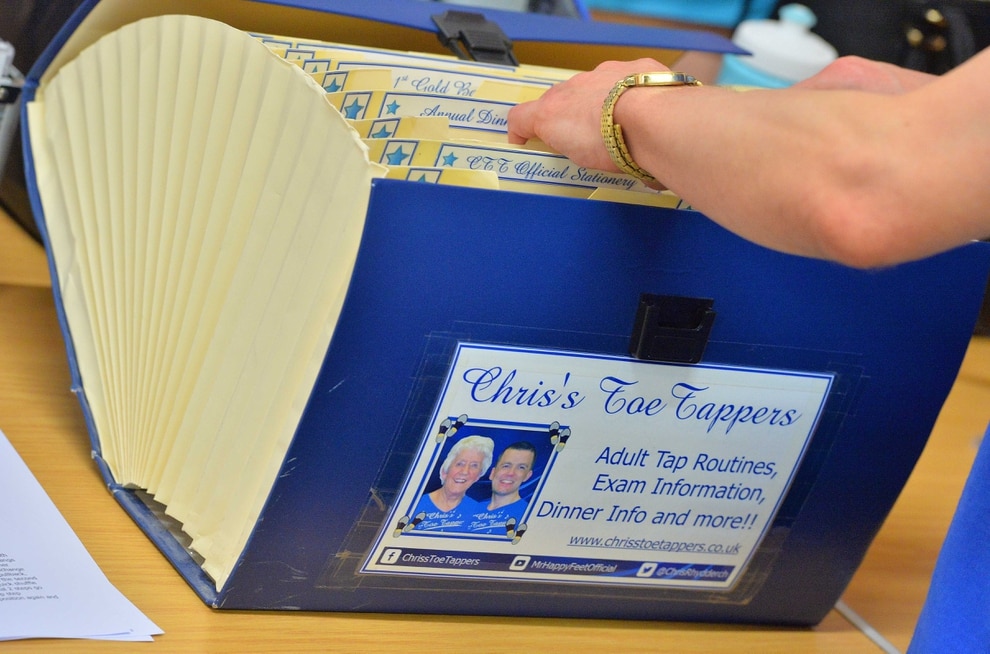 A catalogue of tap routines 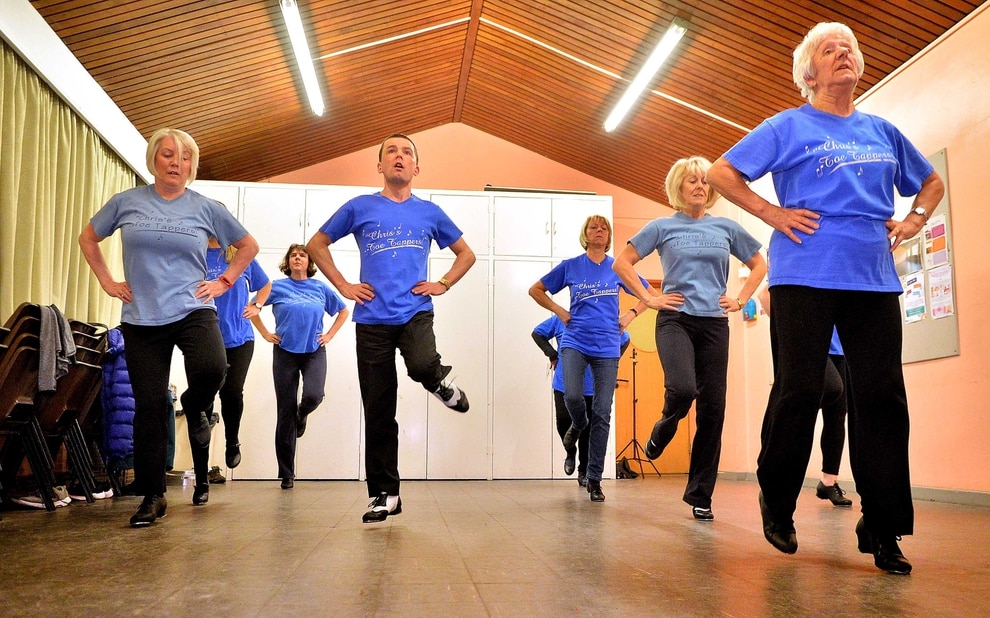 The Toe Tappers in action

Together they enjoy sharing their passion and expertise with others by teaching adult tap dancing classes.

Chris Rhydderch, aged 79, first started dancing at the age of eight and her son, also named Chris, 44, began lessons when he was six.

The pair, of Pelsall, both qualified as professional dance teachers in their late teens and now run Chris’s Toe Tappers in Walsall, which started more than 30 years ago.

“Our ladies are very loyal and many have been with us for more than 20 years,” said Chris Jnr. Chris Snr, whose husband Ian is secretary of Pelsall Carnival, added: “We love it and they love it. If they didn’t enjoy it there wouldn’t be any enjoyment in it for us.”

She qualified as a teacher at the age of 17 and taught children a range of styles including tap, ballet and theatre for many years at Barr Beacon Community Association.

In 1986, she was asked to start an adult tap evening class at Barr Beacon School and in the mid-90sand it ran successfully for many years.

In the mid-90s the classes moved to St Martin’s Church in Walsall where they still take place every Wednesday. “The numbers have got smaller over the years, we used to run more classes, but everybody is so busy these days but we still have a loyal group and everybody loves tapping.

“It’s great exercise, it keeps me fit and it keeps me going. It’s also good for brain power because you are learning something. You have to have a reasonable amount of stamina but it’s very pleasurable.”

“I love the sound and the rhythm. It’s something I’ve done almost all of my life because I love it that much,” says Chris Snr. Both have gained many IDTA (International Dance Teachers’ Association) and BATD (British Association of Teachers of Dance) theatre grades and medals.

Chris Jnr, who qualified as a professional dance teacher at the age of 18, said: “When I qualified an examiner told me I had an aptitude for this style of dancing. It just comes naturally. I must get it from my mum.”

Tap dancers wear special shoes equipped with metal plates on the bottom and they use their feet like drums to create rhythmic patterns and timely beats. It’s one of the most recognised dances in the world and is said to have originated as a hybrid of the jig and clog dancing from the British Isles and dances brought from Africa by slaves.

It is as popular today as it was in the heyday of the great Fred Astaire and Gene Kelly musicalswith shows like 42nd Street continuing to reach wider audiences.

“When you watch 42nd Street, there is nothing better than seeing and hearing all of those tappers going ten to the dozen,” says Chris Jnr.All of the group’s routines, including those for yearly exams, are two minutes long and are choreographed by Chris Jnr.

At the moment one of the dances the group is learning is a lively, Irish-themed number to the tune of Celtic Kittens from Michael Flatley’s Celtic Tiger.

“I like to think of fresh ideas but it’s hard because we’ve done so many routines over the years,” said Chris Jnr.”I’ll see something on TV or hear a song on the radio and think ‘that might work’,” he said.

“If it catches my attention and I like it, then the ladies usually like it,” explains Chris Jnr.Films including Fame and Dirty Dancing have provided him with plenty of inspiration in recent years.

“We did a keep-fit themed routine for Fame and with Dirty Dancing, I pulled out some of the dance moves from the film and put them into the routine,” says Chris Jnr.

For each number Chris Jnr starts by selecting a piece of music, which he then edits to the correct length for a two-minute routine.

“The idea is that you can’t tell it’s been edited and it sounds like it’s always been a two-minute long piece of music,” he tells Weekend.

He will then start working out the different moves from a shuffle ball change to a running step that will make up sequences.

“Then I’ll just start dancing around and trying different steps until I’ve got a routine I’m happy with and I think the ladies will have fun learning,” says Chris Jnr.

Members are offered the chance to take IDTA exams at the end of each tapping year but they are not compulsory and students can take part just for fun if they preferto do that.

“Our ladies always do very well in exams and we have a 100 per cent pass rate every time. The exams aren’t compulsory but they like to have something to work towards,” says Chris Jnr.

As well as the exams, they organise an annual tap dinner and group theatre trips for the students every year.

They both find teaching very rewarding and say they enjoy running the group side by side.

“We work well together and we never argue about anything,” says Chris Snr.